Hi everyone! Lately, I’ve seen a bunch of Youtube videos of girls recreating famous artist’s and model’s Instagram pictures and I really wanted to try it out! In the beginning, I wasn’t sure who to do, as I knew I wanted to do a fun spin on it. One of my new favorite bands, BTS, has really cute pictures I wanted to recreate. Also, their new comeback song was released yesterday, so it’s the perfect time to make this! If you don’t know who BTS is, they are a Korean boy band whose music is starting to grow very quickly in the US. I discovered them about a year ago and have been listening to their music ever since. By the way, this little challenge was done back in December, so that’s why I am wearing sweaters! So without further ado, let’s get started!

I found Namjoon’s picture to be the easiest one to recreate out of all the members. This is because his style of taking pictures resembles the way I take my pictures. In this adorable picture of his, he is candidly walking away from a carousel. If I’m quite sure, his picture was taken in Rome. Luckily for me, I was in France at the time so I had somewhat of the same building architecture. That day, I was out with my parents trying to find a way to recreate this photo. I spotted a carousel and quickly snapped a couple pictures. It was too gloomy out to wear sunglasses like him, but I did get the whole black outfit down, as well as a little bag on my shoulder.

For Yoongi’s picture, I had to find some type of outside bakery, which is pretty common in my grandma’s town. However, it was a struggle to get the right picture. The way he angled his body and how the camera was angled was difficult to recreate. One picture I was too turned away, the other the camera was too close.  I had to improve because I didn’t own a coat , hat, or mask like his. I had a coat with a fur hood so I decided that I would that to cover my face. Looking closely at his eyes, it looks like he was giving a small smile so I did the same. Overall, it’s definitely not an exact copy, but I think the picture came out pretty decent.

I struggled the most on this day. Looking at the picture, I was like “oh so easy”, but not at all. On this day, my grandma and I headed to the museum. I wore a floral shirt just like he had. The first goal was to find a type of portrait painting, and while we did find some, the pictures were awful! I couldn’t understand how he posed. His hand was high up, due to the fact we can see his jawline, but every time I tried, it looked like I was looking up. I came up with the theory that his jawline and face is probably just way bigger than mine.  To be honest, I don’t know how I feel about this picture. There’s definitely a lot of mixed feelings on this one. 😂

Jungkook’s picture and mine are the ones that look the least alike. In his picture, he is at the beach and looking back. I was nowhere near the beach, so again I improvised. My grandma’s apartment has a beautiful view of the town. I decided that her view of the apartment would be enough. I wore a sweater with a mock neck to resemble what he was wearing and filtered the photo in black and white.

To take this picture, I had to master some confidence in myself. I am a very shy person so taking pictures in front of others can be a little difficult for me. In this picture, J-hope was at the store taking a mirror selfie. The first challenge was to find a store with big mirrors that resembled that one. I tried to take some in the fitting rooms but the mirrors were all too small. At about 8 pm, when I was about to give up, I found an H&M store with massive mirrors on the walls. Luckily, there weren’t many people in the store, but I still got a couple glances my way when taking this picture. I had to change up the style because I had no shirt or shoes that resembled his, plus it was way too cold in France to wear what he was wearing. I put on mom jeans and a white hat I found in the H&M store. The outfit doesn’t quite look the same but I think the picture came out pretty good.

Jin’s picture was hard to find because I tried my best not to do selfies in this challenge. However, this picture was just too cute to pass up. This adorable picture is him with his dog. I was super excited to take this picture as I have a white dog as well. I wore a striped shirt and took selfies with my dog for 30 minutes. It was definitely harder than it sounds. Also, I have a theory that only Jin can look good from a down angle because my double chin had never been this exposed before. I was lucky to find a picture where my dog also has his mouth open and wow. This was for sure the cutest (and funniest) picture of the week!

Though I love Jimin’s selfies, it’s definitely hard to find a picture of him posing. Just like Jin, I chose to do a selfie. I don’t know how I feel about it lol. I was not able to get the face he was making. He looked annoyed, sad, yet cute? and I had no idea how to recreate it because I would try to do the same, but it always looked so different. I paired a striped orange and blue shirt for the outfit because I owned no flannels like his. I also downloaded the app Snow, the app he gets his filters. Luckily, I found the same one. These are the pictures that I think worked out the best.

So that’s it for this post! I hope you guys enjoyed reading it, I sure had fun making it. If you found it funny, share it everywhere (share it on twitter and tag them 😉)! Comment below which one you think I best recreated. I’ll see you guys in my next post.

10 thoughts on “I Recreated BTS’ Style and Pictures for a Week.”

Welcome To My Blog! 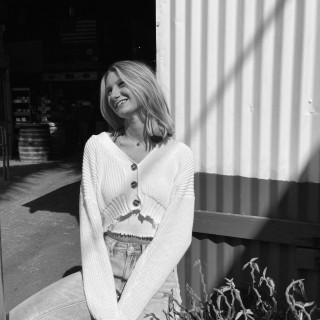